We have a badger in our Preserve! North American badgers are solitary animals that prefer to live in dry, open grasslands - which is why our Preserve is the perfect habitat for them! They are nocturnal animals who tend to be inactive during the winter months. They are not true hibernators, but spend much of the winter in cycles of torpor.
Badgers are excellent digging machines! Their powerfully built forelimbs allow them to tunnel rapidly through the soil to create up to 35 feet of tunnels! Their burrows are constructed mainly in the pursuit of prey, but they are also used for sleeping. Badgers have keen vision, scent, and hearing. They are carnivorous animals, whose diet consists mainly of squirrels, moles, rats, mice, voles, birds, amphibians, fish, and insects! Unlike many carnivores that stalk their prey in open country, badgers catch most of their food by digging. They can tunnel after ground dwelling rodents with incredible speed.
Natural predation on badgers is rare, with young animals being most vulnerable. The primary predators of badgers are humans who are responsible for the destruction of their habitat. Other predators include eagles and coyotes. Badgers are important consumers of many small prey items in their ecosystem. They help to control rodent populations, kill venomous snakes, and eat insects and carrion. Their burrows provide shelter for other species and their digging activity helps in soil development.
We are glad that we can provide the right type of habitat to support a badger right here in our Preserve! This is also why we encourage our friends to keep their dogs on a leash year-round and leave only footprints while visiting our Preserve. 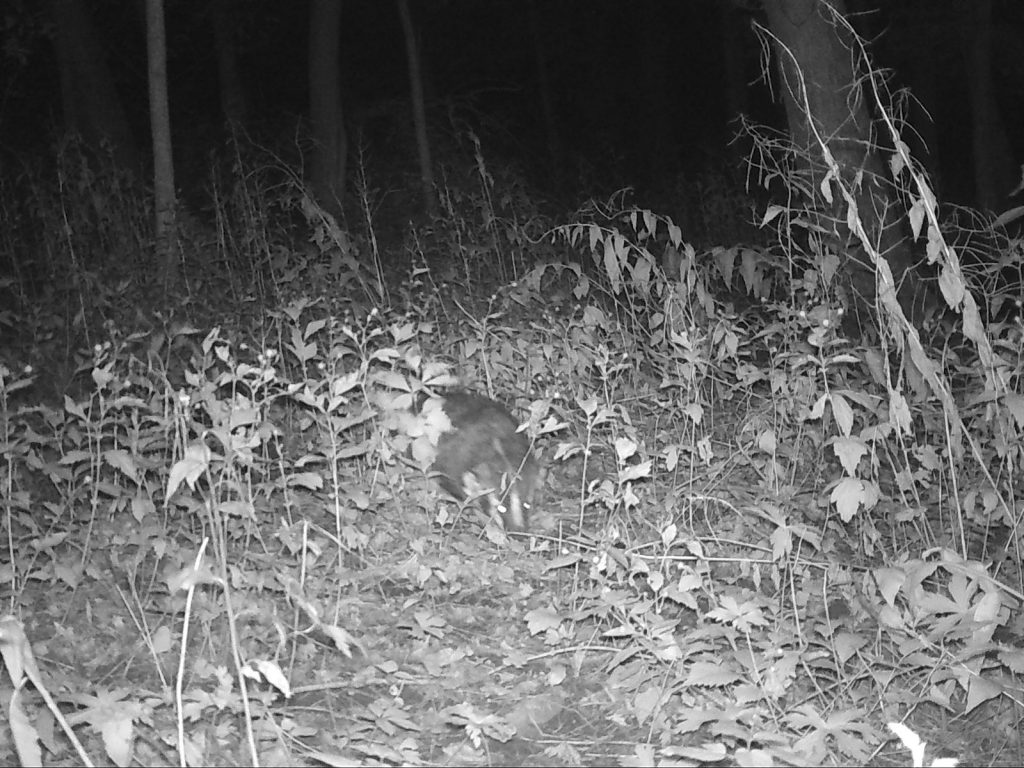 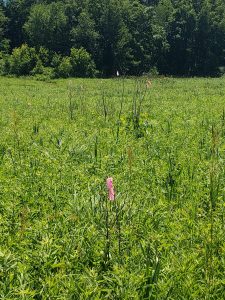 Have you walked through the Preserve lately? If so, you’ve probably noticed a bunch of small trees have been marked with neon flagging tape in the portion of the prairie that was burned this spring. The tape is marking small trees that need to be removed from this area so that prairie species continue to thrive in this area.

Part of the reason why we burn our prairies is to be able to detect these saplings early enough to prevent them from causing any damage to the ecosystem. These saplings are species that do not normally grow in a prairie, but their seeds have been brought here by birds, wind, or other animals! The saplings get burnt to the ground during a prescribed burn, but their root system can survive the fire and can send up new growth after every burn.

The prairie species that currently grow here rely on open grassland habitats to flourish. Removing the trees will increase the amount of optimal habitat for birds that utilize prairies for nesting such as grouse, pheasants, and various songbirds.

You may have been wondering what the green floating mats around the shorelines of our lake are – it’s algae! Algae is a simple, nonflowering aquatic plant that get its nutrients directly from the water, meaning their growth and reproduction are entirely dependent on the amount of nutrients that are in the water. Usually, algae forms small mats on the water’s surface and they can provide cover for small animals such as aquatic insects, snails, and scuds – all of which are important fish food!

Only a small percentage of algal species can cause harm to humans and the environment through toxin production or excessive growth. Most algae begin growing in response to nutrients that have washed into a lake. Algal growth serves as nature’s way of capturing these nutrients and contaminants that otherwise would be carried downstream to impair other streams or lakes! The mats may be unsightly, but they are doing what they evolved to do! Algae growth is not related to our weed harvesting program.

Nuisance growth of algae occurs when a lake has excessive nutrients – usually phosphorus. When mats of algae grow to cover large areas, they limit the amount of sunlight and oxygen that is normally is exchanged. This prevents the plants below from photosynthesizing and producing the necessary oxygen needed in the water! Due to the lack of oxygen, these conditions usually result in fish kills and noxious odors.

One of the really great ways to help limit the number of algae growing in our lake is to have a shoreline buffer!! This cannot be stressed enough. With so many well-kept, green lawns around the lake, it is inevitable for some of those nutrients (fertilizers, pesticides, etc.) that have been put on those lawns to make their way to the lake. Natural shoreline buffers are essential when it comes to keeping our lake clean.

If you are interested in installing a shoreline buffer, please contact the office at [email protected] or 608-423-4537. 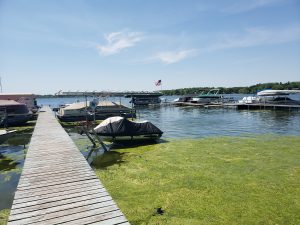 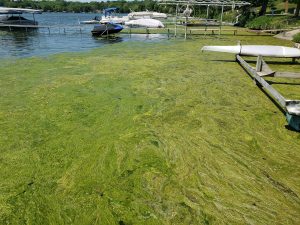 With water temperatures rising in area lakes, a naturally occurring bacteria may cause local fish kills.  The bacteria is commonly known as columnaris (Flavobacterium columnare).  Columnaris outbreaks typically occur when water temperatures reach 65° to 70° F and rain events cause organic material to run into lakes and streams causing the bacteria to thrive and multiply.  These conditions, combined with increases in spawning hormones (or other stressors such as low dissolved oxygen) which suppress fishes' immune systems make columnaris outbreaks more likely.

The most commonly affected fish in Wisconsin are bluegills, crappies, yellow perch and bullheads.  Columnaris is aggressive and can rapidly spread and kill fish in a short (24 hour) time frame.  Disease characteristics include yellowish mucus on part of the fins or gills, usually surrounded by an area with a reddish tinge, and associated sloughing skin.  “In most cases, columnaris bacteria destroy gill tissue, causing the fish to become listless.  Sick fish may be observed at the water surface and may have difficulty swimming and maintaining their balance,” according to Sue Marcquenski, a DNR fish health specialist.

Columnaris outbreaks are typically seasonal, and pose no threat to humans.  However, you should not eat fish you find dead, decomposing, or that appear sick, regardless of cause. Decomposing fish may attract other bacteria harmful to people, so you should always wash your hands after handling fish especially if the fish is dead or appears diseased.  Dead fish and fish with sores may be contaminated with bacteria and it is a good idea to wear protective gloves when handling dead fish.

Although it can appear to produce large scale fish losses in a matter of several days, columnaris usually does not have a catastrophic impact on overall fish populations in the bigger picture of a lake ecosystem, according to fishery biologists.

If you catch a diseased fish or observe a fish kill take the following steps:

The local fisheries biologist will contact you as soon as they are available and will make the determination about whether the fish should be examined or not.  DNR staff will not have time to visit every occurrence of dead fish or examine every potentially diseased caught fish. 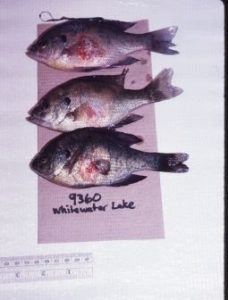 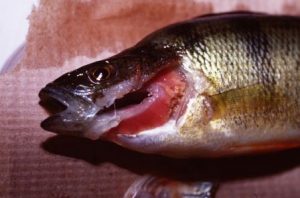 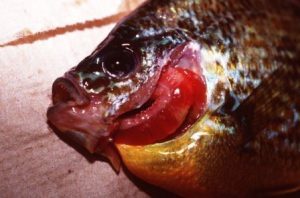